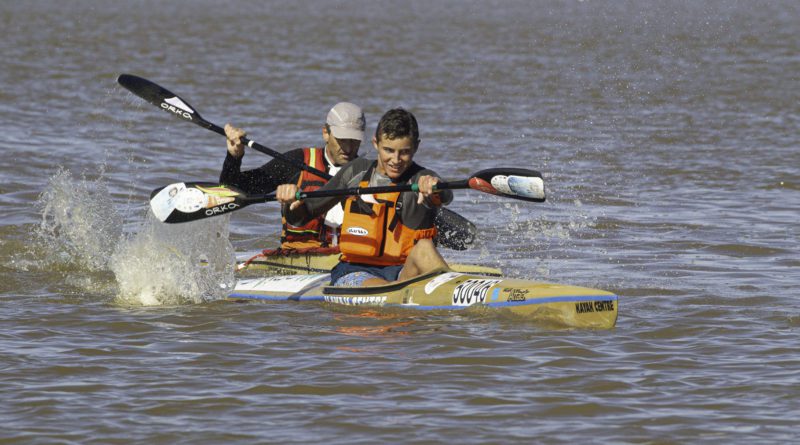 Paarl – Good rains have left a full river and a buzz of excitement for the 58th edition of the Berg River Canoe Marathon that starts at the Market Street Bridge in Paarl on Wednesday morning, with the second running of the new team competition adding to the buzz around the famous four-day race to the West Coast.

Defending champions Graeme Solomon and Hungarian Adrián Boros are back to defend the inaugural team title they won last year, and Solomon says the team competition can be expected to evolve significantly in its second season.

“The team dynamic changes the whole race because you are never certain what is going to happen next,” says Solomon . “It is so interesting to see guys now racing and training together as a team.”

He added that the team format levelled the playing fields and brought into play athletes who might not be able to match the local knowledge of some of the Western Cape regulars.

“That’s the awesome thing about the team format. It makes this unique race so much more accessible to elite paddlers who perhaps don’t have enough experience on the Berg. With a seasoned partner you can get any decent marathoners to team up and be competitive, and I think you will see a lot more of that this years and in years to come,” said Solomon.

The challenge to defend the team title will be tough as a strong field of teams has assembled, ranging for international pros to a hungry group of young paddler eager to assert themselves on this famous race.

Czech Republic marathoner Petr Mojžíšek is back for his third Berg, after his podium finish in 2017, and has co-opted the strong young German paddler Matthias Schmidt to partner him this year.

They will find company in their bid to keep Solomon and Boros honest in the powerful Under 23 crew of Alan Houston and Stew Little, a Berg debutant, and locals Zach Preyser and Bartho Visser.

Another Paarl local Luke Stowman, fresh from winning the Western Cape K1 river title will pair up with the experienced Jermaine Pietersen, while Paarl stalwart Wayne August and Joseph Williams will soak up the local support.

The seasoned Thulani Mbanjwa teams up with Change A Life Academy ace Msawenkosi Mtolo while Khumbulani Nzimande pairs up with Siyanda Gwamanda in the Team Capensis Change a Life team.

Hamish Lovemore has Tyrone Maher signed up for their Berg podium challenge, while Anders Hart has scooped the services of Kiwi marathoner Andrew Mowlem.

After taking their time to settle into combinations, some of this race’s perennial pacesetters have also confirmed a number of crews that can offer guile and experience to challenge the speedy youngsters, including Heinrich Schloms and Louw van Riet, Gavin White and Ernest Van Riet and the pairing of Simon van Gysen and Paul Marais.

In a milestone for the new team event, the first women’s team to enter has attracted much attention as Tracey Oellerman and her former maths teacher at Epworth Melissa Van Rooyen pair up for the 240km odyssey to Velddrif.

Equally important is the mixed doubles team that were amongst the very first to enter this year, as Lisa Scott teamed up with Kevin Bouwer, and the strong Melanie van Niekerk pairing up with Richard Allen.

The race is committed to honouring paddlers who thrive on the traditional Berg challenge of paddling the 240km section of the Berg River as solo paddlers, honouring the race’s pioneers and taking on what is accepted world-wide as one of the sport’s ultimate challenges.

Amongst those icons are 79 year-old Jannie Malherbe, who raced in the first ever Berg in 1962 and went on to win the next three editions of the race. The likeable and self-effacing George resident will set a notable milestone by finishing his 47th Berg in the year he turns 80.

Giel van Deventer will set off for his 49th Berg medal while another passionate Berg support Edgar Boehm will look to extend his unbroken run of Berg finishes to 46.

The region has welcome good winter rains, and together with an arrangement with the Department of Water Affairs for a controlled ecological release from the Berg River dam to ensure a steady water flow above Misverstand dam.

Off the water, each day of the race will host five Mandela Centenary Freedom Walks to be held in Paarl, Hermon, Wittewater, Broodkraal and Velddrif, and each finisher will get a medal to commemorate their participation.

The race gets under way at 9am from the Market Street Bridge in Paarl on Wednesday 3 July and finishes in Velddrif at midday on Saturday 6 July.

More information can be found at www.berg.org.za – (Press release)