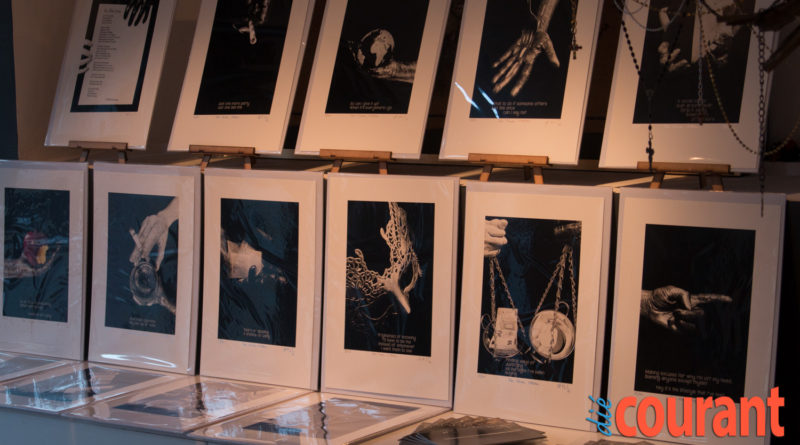 On an early winter evening when the night begins to set earlier and the streets in Woodstock become quieter, the arts in Cape Town start blooming with new life – also in the Art is Art Gallery.

Two Swartland residents brought their special collaboration project to this Sir Lowry Road gallery to be exhibited with a variety of artwork.
She came to visit Riebeek Kasteel a few years ago and then decided to stay.
Poet Tracy Fairston, originally from England also lived in Spain for many years. She was still at school (in a school hostel) when she started to write poetry.
In Riebeek Kasteel Fairston met artist Li Nepgen. They became friends and decided to publish one of Fairston’s favourite poems she describes as “very personal” in a book along with supporting photographs that Nepgen would take.

The Final Straw.
Nepgen tells how they took the photos with a cell phone and except one that was later digitally merged, everyone was originally just out of the phone.
For the black background a black jersey was used and for most of the photos hands and masks were painted white.
At the exhibition in Woodstock owner, Reno Horn welcomes the guests. Among the guests are a group of friends and supporters from the Riebeek Valley as well as artists such as the actor and radio personality Lynita Crofford and comedian Clive Allerdyce.
Fairston takes a seat on a chair with the spotlight on her.
After a few words of encouragement by seasoned performing artist and director Mark Graham-Wilson, she performs The Final Straw.

A special work that strikes deep.

From The Final Straw

A Lifetime of using

All the highs I’ve been buying.

Making excuses for why I’m off my head

Blaming anyone except myself