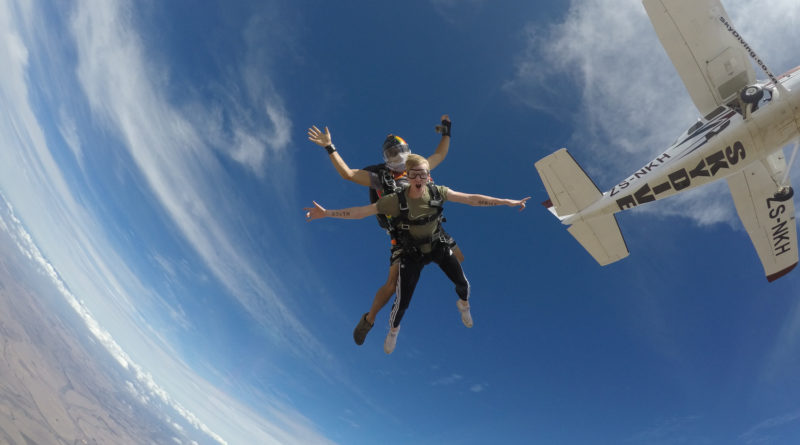 “Open the skies and let the games begin
Spring Day, 1 September, should celebrate the grand re-introduction of international tourism according to a birds eye view of the sector.
“Already more than a hundred locals have signed up for our recently announced post-lock down ‘3.5 km Social Distancing Special’” says Mike Rumble of Mother City SkyDiving – Cape Town. “Since we are a niche activity, this is evidence of a popular groundswell.”
Rumble’s experience is buttressed by research undertaken by leading German travel booking company Tourlane which revealed South Africa as the most favoured post-Covid destination.

“Suggestions that tourism remain in limbo till February 2021 are unduly pessimistic,” says Rumble. “The time-frame has been ill-received by the sector, which is unanimously behind The Tourism Business Council SA’s lobbying for a phased re-introduction of International inbound tourism from the onset of spring. We believe that locals can be safely accommodated much earlier and look forward to getting the go ahead to resume operations and get back up in the air.”

Rumble points out that skydiving and parachuting are already strictly regulated by government-approved controlling bodies. As well as complying with general Covid-19 regulations, skydiving dropzones around the world have introduced protocols specific to the sport. Moreover, like a lot of South Africa’s adventure tourism products, drop zones are typically located at small airfields far from developed areas with already small group sizes consisting of close family and friends.
In the interests of a robust, sustained tourist economy, the Western Cape Provincial Government is also throwing its weight behind an urgent move to allow opening of all sectors in the tourism, travel and hospitality industries which comply with hygiene and social distancing protocols.